The Kind of Man Roy Halladay Was

In 2013, Roy Halladay's health failed him. He ultimately had to have surgery on his right shoulder, and it was clear the end of his career was in sight.  The two seasons prior were not his best body of work, to say the least. In a testament to what kind of man he was, I am posting the impromptu press conference he called with reporters who happened to be around the clubhouse. He wanted to basically apologize to the fans for letting them down...or at least feeling that way.

Taken from: http://www.philly.com
The press conference...Roy sits down at his locker and begins speaking. Remember, he called this press conference.
Halliday: "So, one, I just wanted to thank them for their support. And my heart goes out to all of the people who spend all of their money and go out to the games and don't get to see what they want to see. I know I'm not the whole team. There are still a lot of guys out there, and it's a fun team to watch. But I feel bad that I'm missing the time that I am. I feel bad for the fans that I'm missing the time.
"It's tough. You feel an obligation to the organization, to your teammates, to the fans to try to go out and pitch. Especially on a competitive team that sells out. For me, that was a big factor. If I'm playing for a last-place team and there's things going on, you maybe speak up. But we have a chance to go win a World Series, and we have sellouts, and fans have expectations. You want to do everything you can to try to make it work.
"Really, that was a lot of the reason I tried to keep going. Like I said, I never really felt the pain. I just wanted to reach out to the fans, thank them for their support and apologize to the ones who pay the money and show up in the second inning and it's 9-0. I apologize to the fans that I won't be out there for 3 months.
"I don't feel like I have to apologize to the team, because I think they know. I just want the fans to know that I'm thinking about them. I don't take that for granted. I don't take playing for Philadelphia for granted."
Reporter: "Why or when did this start to weigh on you, your last start?"
Halladay: "No, it bothered me last year, it bothered me this year. Anytime you go out there and pitch poorly. First and foremost, I felt bad for my team. I felt I wasn't doing what I was supposed to be doing. And then you start to think about it and you think, 'Man, all of these people are paying good money, they're showing up and they've been so supportive over the years, and they're not getting what they want either.' It's just something you think about. Like I said, my teammates know I want to be out there. I feel like the fans are a very important part of it, too.
"It's hard to explain how much you appreciate them when you come from places where you don't have fans like that. I think it's important to recognize them. The good and the bad. I understand that some people are upset, and that's fine, that's a part of it. I'm not trying to sway their opinion. If they don't like me, they don't like me. That's fine. I think they mean a lot to the organization, they mean a lot to Philadelphia. We couldn't do what we do here without them spending they money to come see games. I think that sometimes gets overlooked in sports. They're a big part of the team success."
Reporter: "But you're probably upset you won't be out there too, right?"
Halladay: "Definitely. It's hard to swallow. But like I said, I've always tried to be optimistic. That's what you try to focus on. It's too easy to look at the bad stuff. The hard part is sometimes it's things you can't control, and I think you have to recognize that. This is one of those things where it got to the point where I couldn't control it. And I had to get things taken care of."
Reporter: "Doc, I don't know anyone who doesn't like you."
Halladay: "If I paid $60 and the team was down, 9-0, when I showed up, I wouldn't like me."
Reporter: "That's little-picture stuff, though, not big-picture stuff."
Halladay: "Yeah. But my heart goes out to them. And to my team. I just wanted to make sure . . . I felt they're a big part of everything and I've always appreciated their support." 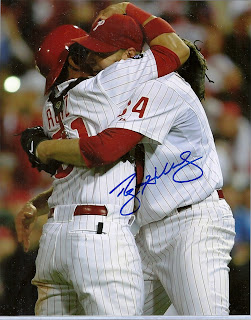 This is the picture I had signed in person by Roy. 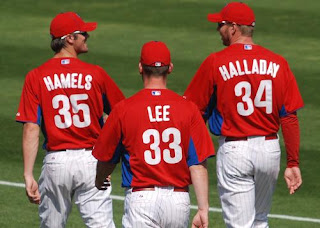 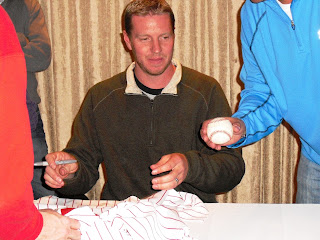 When I met Roy. 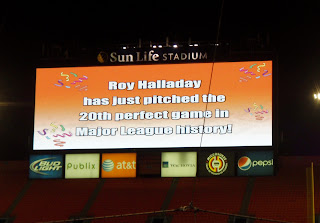 Another milestone.
Posted by Funner Here at 9:34 PM No comments: 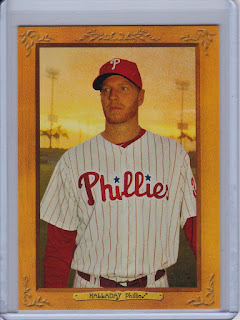 There is a public memorial service at Spectrum Field in Clearwater, Florida today at 4pm. It is going to be streamed live on mlb.com, in case you are interested in watching it either live or on replay.

In lieu of flowers, the Halladay family has requests contributions be made to:
Halladay Family Foundation
c/o The Giving Back Fund
5757 W. Century Blvd., Suite 410
Los Angeles, CA 90045

The Halladay Family Foundation supports organizations that are tied to two causes that are most meaningful to the Halladay family -- youth sports programs and animal welfare. Beneficiaries of foundation funding will include, but not limited to, organizations that provide the opportunity for young athletes to develop to their highest potential, with particular emphasis on sportsmanship and building greater self-esteem. Additionally, organizations that help to improve the quality of life for animals through rescue, adoption and humane treatment will be eligible to receive funding.
Posted by Funner Here at 12:05 PM No comments: 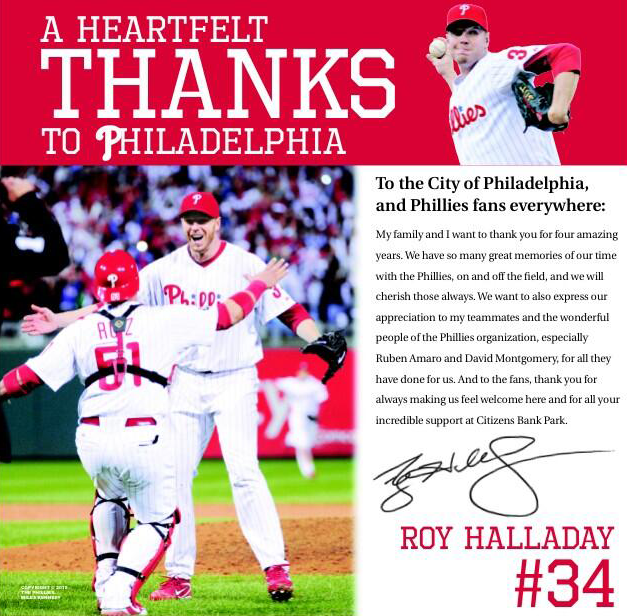 Use code LSC10 for 10% off pick your team style breaks!